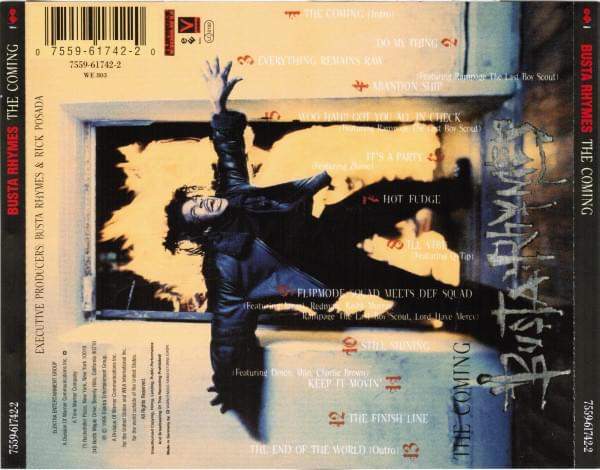 Download another clean mp3 audio song by Busta Rhymes and this song is titled “The Finish Line”.

Whatever way you chose you got to leave your life

And yo! I can’t afford to waste a second

Stepping with my eyes on niggaz checking on my weapons

Every millisecond, motherfuckers say they true to this

But when they grab the microphone they shit sound like stupidness

Feel my hot wax, burning from my melting candles

You can’t take the heat, so you switch from boots to wearing sandals

This is for example! Shit will make a nigga curse

When worse comes to worse, you be the first to disperse now

We don’t believe your man was living like that

It’s a damn shame how Son know your style, know your name

Watch how he pull your file, make you wish you never fucking came now!

Even the hardest motherfucker has his final day

So kill that shit you talking, and be about your fucking way

Yo, everyday I see you on the block smoking

Ah! Your man came to put you on and tried to make you bleed

And the way they rass they really got to bust yo’ shit!

Thought your man was joking, paid no attention to the situation

Got with your crew and just continued smoking

Now your man sit and watch you panic

In any other situation you’d be fronting like you gigantic

I guess all that fronting is your main talent

It’s apparent, he can see right through you like you transparent

Haha, hey yo you need to watch your back you running out of time

Watch your step, ’cause you only inches from the finish line

Now, there’s about a million motherfuckers on your trail

I’m watching all the moves you making fuck the speculating

Every move you fake you dig your grave a little deeper

Listen to this: overstress my emphasis

Hoo! Take a look around you get no type of sympathy

Impatiently, I sit and watch you die in your own iniquity

Haha, now you out dead and stinking, and your eyes are no longer blinking

Time caught up quick, with your little bitch way of thinking

Ah, watch you diminish, while your niggas have to put a finish

On your misleading false image

Word is bond, bond is life

You shall be willing to give your life

Before your words shall fail

All those who out there fronting, misleading they peoples

Acting other than they really are

It will catch up to you player, word is bond

So that’s, specifically, to all those fake motherfuckers

Living out here on that bullshit

Eben – No Shadow of Turning

Brandy – All In Me