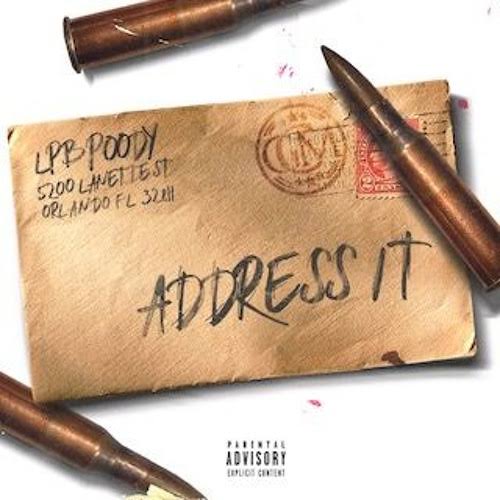 Actually this amazing music is popped out of an album which is titled “Address It” And it was released in the year 2019.

These niggas got it…

Bitch, I got it off the muscle

He wanna fight, I don’t tussle

I see the pussy boy ain’t learned his lesson

Ain’t no location, but I’m gon’ address it

‘Cause how I feel, it’s time to go to steppin’

This shit here gon’ get messy

These rappers be so lame, but they want fame from the media

Poody, that’s my name, go check me out, Wikipedia

“No Lolz” explain itself a lot, I defeated ya

I got it off the muscle, who the fuck said I needed ya?

I made a name for myself, pussy boy, I don’t need you

He say I shed skin, no python, but I squeeze too

I say them niggas do they thang, but they don’t do it like we do

No ratatouille, we got the recipe to get cheese too

Like how the fuck you ‘posed to leave the streets when they feed you?

You gon’ feel how you feel, but don’t let that mislead you

Kickstand all in my cup, ’cause I be sippin’ lean

He only tote when he on monkeys, so make him pop a bean

Niggas always reachin’ for some clout, bruh, that shit so green

I’ma make sure that they hear me through these headphones

You niggas speakin’ on these charges, dawg, y’all dead wrong

But let a nigga speak on Mari, then his head gone

I’ma set his ass up with my lil’ redbone

My lil’ bitch in Jacksonville scopin’ out every home

Sticks and stones when we slide, breakin’ every bone

Make these niggas multiply ’cause his mans gone

However you niggas wanna take it, nigga, we can take it there, nigga (No rap for none of you niggas)

It don’t matter, however y’all wanna do it, nigga (You social media-ass niggas)

Gunplay, anything, nigga, I’m down with whatever, nigga (You fuck niggas ain’t livin’ like that)

Y’all know how I’m comin’, nigga, Lightpole (You know what I’m sayin’? Niggas got me fucked up, but I’ma go back in there)

G7, get cheese the movement, nigga

Keep talkin’ that shit, you wanna jump me?

Man, fuck that, I ain’t gon’ even rap no more, nigga, you niggas get the message

You niggas know what the fuck I’m tryna say

Just don’t at me in shit, nigga

Don’t at me in nothin’ on the ‘Gram, nigga

Or wherever I see your ass at, it’s gon’ be that, nigga