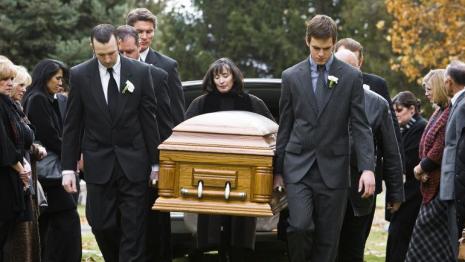 Sometimes death is the only way out.

At least that’s what Danny Gonzalez from Honduras thought. He had been living in the USA for some time, where he was repeatedly bombarded by his wife with telephone calls from home.

Apparently this was too much for the 27-year-old. He had to find a way to free himself from the brutal shackles of long-distance relationships. He had to die.

He staged a picture of himself on his “deathbed”, covered with cotton wool in his nose and a white cloth. Another photo showed a coffin covered with flowers. His cause of death: cancer and asthma.

He sent both photos by mail to his wife in Honduras. The local media got wind of the tragic death and picked up the story. But even a little research revealed that Gonzalez was not as dead as he claimed to be.

“My wife calls me every week just to tell me to send her more money,” the fictitious dead man said as the reason for his unconventional approach. “I had already sent her six [cell phones] and she kept calling me to tell me it was stolen.”

Orezi – No Advise Me